Sheffield United faces a trip to St. Andrew’s as Chris Wilder’s men take on Birmingham City on Wednesday in the Championship.

The Blades bounced back from a disappointing defeat to Bristol City with a narrow 1-0 victory at Preston last weekend. Wilder will look to build on from that result and keep his team in the hunt for automatic promotion.

Birmingham City, meanwhile, sprung an upset by beating promotion chasers Leeds United at the weekend and will be eager to cause another upset on Wednesday.

Jake O’Connell missed the Preston game with a calf complaint and remains doubtful for the trip to St. Andrew’s. Other than him, Wilder has no fresh injury concerns ahead of the game.

Henderson will be aiming to keep a clean sheet at Birmingham City after shutting the shop in the 1-0 victory over Preston.

Baldock has been a regular fixture in the team this campaign. He will look to put in a stellar display at right wing-back in midweek.

Egan has been a rock at the back for Sheffield United this season. Due to his strength and power, he is a very tough defender to get past.

Basham continues to be an important part of the Blades’ three-man backline. He is expected to start on Wednesday.

Stevens has been a consistent performer at left wing-back for the Blades this season but as O’Connell remains doubtful, he’ll be part of the three-man backline.

Struggled at left wing-back at Preston but with Stevens expected to start in central defence, the Everton loanee could be handed another chance.

One of the most important pieces in the United engine room, Norwood controls the game with his passing and tackling abilities.

Fleck is a tenacious customer who adds a lot of energy and intensity to United’s play. He is one of the first names on the team sheet.

Duffy has had injury problems this year that has affected his form. A creative player, however, he will look to link the play between the midfield and the attack.

Scored a goal in the first half at Preston with what turned out to be the winner last weekend. A clever striker, McGoldrick is expected to retain his place in the team.

A dedicated player who has been the Blades’ chief source of goals this season, Sharp will be desperate to get his team to all three points against Birmingham City. 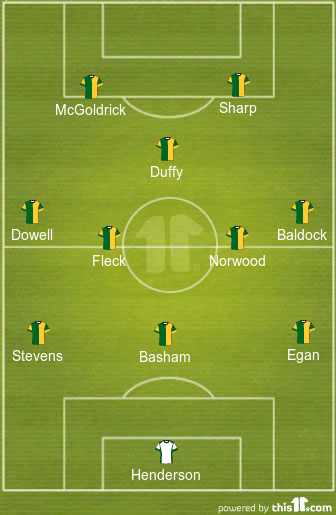