Liverpool welcome Porto to Anfield for the first leg of their Champions League quarter-final on Tuesday as Jurgen Klopp aims to take a healthy advantage ahead of next week’s second leg in Portugal.

The Reds returned to the top of the Premier League table with a 3-1 win at Southampton on Friday. It can be argued that the Premier League is the Merseysiders’ priority for now, but Klopp’s men are overwhelming favourites to overcome Porto in this quarter-final.

Porto will be looking to avenge last week’s thumping at the hands of Liverpool and seek a place in the semi-finals of the elite European competition.

Liverpool will be without left-back Andy Robertson, who is suspended having picked up a late booking at Bayern Munich.

Elsewhere, Alex Oxlade-Chamberlain and Joe Gomez are still carrying injuries, while Adam Lallana is struggling with a muscular injury.

Alisson is the Reds’ first-choice goalkeeper and will keep his place against Porto.

Alexander-Arnold has been really impressive this season. He is expected to start Tuesday’s game at Anfield.

Matip’s form has improved drastically since being paired with Van Dijk. The towering Cameroonian will retain his place in central defence.

Van Dijk has transformed Liverpool’s defence with his ball-playing abilities, positional awareness and leadership qualities. He is an undoubted starter for the Reds.

With Robertson suspended and Moreno out of favour, James Milner will certainly start at left-back in the first leg against Porto.

Fabinho has been excellent in the defensive midfield role for Liverpool. He should keep his place in the team.

Scored in the 3-1 victory over Southampton last week and will be looking to guide Liverpool to a first-leg advantage over Porto.

Wijnaldum couldn’t much against Southampton but he’ll be desperate to make a mark in the Champions League.

Salah ended his goal drought in the Reds’ victory at St. Mary’s. The Egyptian will be hoping to put in a big performance against the Portuguese champions tomorrow.

Mane is in blistering form and will carry the biggest threat. The Porto defenders have to be at their very best to stop the jet-heeled Senegalese at Anfield.

A shrewd customer, Firmino links up play very well and his intelligent movement make him such a difficult player to mark for the defenders. 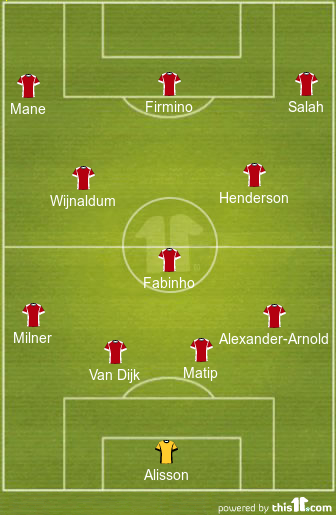 “Liverpool next, bring it on”, “Blue is the colour”: Some Chelsea fans react with joy to 2-0 win vs West Ham + Player Ratings