Norwich City welcome QPR at Carrow Road on Saturday as Daniel Farke aims to maintain his team’s position at the top of the Championship table.

The Canaries edged a 1-0 victory over Middlesbrough at the weekend, thanks to a second-half strike from Onel Hernandez. But Farke will be expecting an improvement in the team’s performance as well as a positive result at the weekend.

QPR, meanwhile, have not won in their last five games and come into the weekend’s game on the back of a 2-1 defeat to Bolton.

Farke has no fresh injury concerns ahead of the game.

Krul has been a big part of Daniel Farke’s team this season and will be between the sticks as usual.

Aarons has been excellent this season, making him one of the first names on Farke’s team sheet.

A rock at the back, Zimmermann has been a regular fixture since the start of this season. A certain starter against QPR.

A revelation in defence, Godfrey has played every game since the start of December and should keep his place.

Lewis is among Daniel Farke’s most trusted players this season and should continue doing the good job at left-back.

Trybull has stepped up following injuries to Tettey and Vrancic, regaining his mojo with a consistent run in the team.

McLean has established a strong partnership with Trybull in the middle of the park. They are responsible for making Norwich ticking all over.

The only attacking midfielder at Norwich City’s disposal, Stiepermann has contributed to the Canaries’ bid for promotion with six goals and five assists.

Easily among Norwich City’s best players this season, Buendia adds a lot of creativity and dynamism to the side. He is a certain starter against QPR.

Scored a really good goal at Middlesbrough which eventually turned out to be the winner. Hernandez is a very tricky customer and on his day, he’s just too hot to handle for the defenders.

The prolific Finland international has an outstanding 25 goals and 12 assists to his name from 39 games in all competitions for the Canaries. He is expected to lead the attack on Saturday. 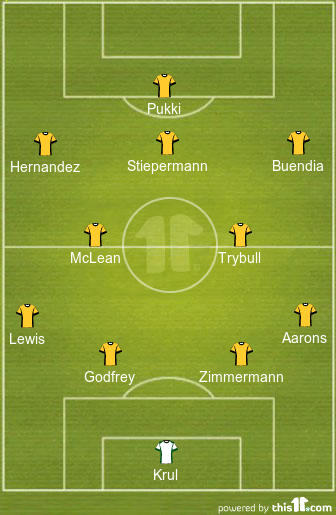