Sheffield United will look to bounce back to winning ways when they travel to Preston on Saturday.

The Blades endured a shock 3-2 loss at home to Bristol City at the weekend, despite taking the lead twice in that game. Chris Wilder will demand a response from his team on Saturday at Deepdale and look to reclaim the second spot.

Wilder’s opponents are Preston, who are tenth in the table and fighting for a place in the play-offs.

Jake O’Connell is expected to be fit for the Preston game despite limping-off with a calf problem during the closing stages against Bristol City.

But Mark Duffy remains a major doubt for the trip to Deepdale and next week’s game against Birmingham City.

On loan from Manchester United, Henderson has been superb so far this season and is Wilder’s first choice in goal.

A tenacious customer, Basham has been a regular fixture at the back for the Blades this term.

A real leader in defence, Egan is expected to start at Deepdale on Saturday.

One of the most influential members of United’s team, O’Connell is expected to shake off his injury and make himself available for the trip to Preston.

Baldock has been solid and reliable whenever called upon this campaign and should start again on Saturday.

Stevens is one of the best full-backs in the Championship, currently thriving in Wilder’s system. He’s one of the first names on the team sheet.

Norwood has been a consistently good player for the team, stabilizing the midfield. His presence in the middle of the park is important for Wilder’s men.

He has been the perfect partner for Norwood in central midfielder and is a certain starter at Preston.

With Duffy a major doubt, Dowell could be used in the veteran’s position which will allow him to play his game freely.

Sharp is United’s top scorer this season with 23 goals so far. He will need to continue bagging goals until the end of the season if his team are to get promoted.

McGoldrick has formed a solid partnership with Sharp and the duo will look to wreak havoc against Preston at the weekend. 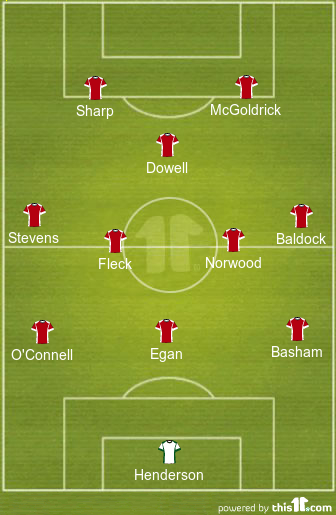