Norwich City return from the international break with a tough trip to Riverside Stadium to face Middlesbrough on Saturday.

The Canaries are in excellent form at the moment, winning the last six games on a row. They are at the top of the table and Daniel Farke will hope to continue the winning momentum.

Middlesbrough, on the other hand, are positioned fifth in the table and will be desperate to get back to winning ways after losing their last three games.

Norwich City have no fresh injury concerns ahead of the game.

Krul is Norwich’s undisputed no.1 and he’ll look to keep a clean-sheet on Saturday.

The young Aarons has nailed down his place at right-back and should start against Middlesbrough.

Zimmermann has led the backline very well this season. He is one of the first names on the team sheet.

Godfrey has formed a solid partnership at the back with Zimmermann. He deserves to keep his place in the team.

Lewis has been a regular fixture in Farke’s starting XI this campaign. He will retain his place at left-back.

Trybull’s form has been impressive since the past month or so. On current form, he simply cannot be dropped.

Scored in the 2-1 victory over Rotherham before the international break and will be raring to get on the score-sheet at Middlesbrough.

With seven goals and nine assists this season, Buendia has been the Canaries’ creative force and will have to be at the top of his game to pierce Middlesbrough’s defence on Saturday.

Stiepermann is the Norwich’s only natural no.10 that links the play between the midfield and the attack. He should keep his place in the team.

Hernandez could be a threat for Middlesbrough defenders due to his raw pace and silky dribbling skills. He could be unplayable on his day and the home side will hope to keep the trickster quiet on Saturday.

One of the first names on the team sheet, Pukki has been a revelation for Norwich City this season. The Finn has shown his ruthlessness in front of goal and will be an all-day threat for Boro. 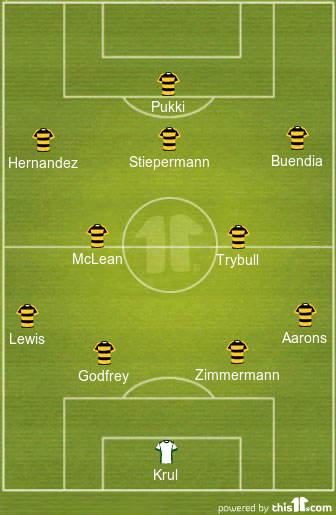