Norwich City travel to the New York Stadium to face Rotherham as Daniel Farke hopes to pick up all three points on Saturday.

The Canaries beat Hull City 3-2 in midweek to make it five wins on a trot in the Championship. They are currently holding a two-point lead at the top of the table and will aim to make it six consecutive wins at the weekend.

Rotherham, meanwhile, are battling against relegation but will be buoyant to cause an upset at home.

Norwich City have no fresh injury concerns ahead of the game.

Made a horrible mistake on Wednesday that led to a Hull goal. Krul will be looking to make amends at the weekend.

The revelation of the season, Aarons has nailed down his place at right-back and should keep his place in the team.

A rock at the back, Zimmermann has been brilliant for the Canaries. He is an undoubted starter at Rotherham.

Godfrey has made a telling impact in the last couple of months, forming a solid partnership at the back with Zimmermann. He deserves to keep his place in the team.

The 21-year-old Jamal Lewis has been a regular feature for Daniel Farke’s side, playing a key role in their promotion bid.

Trybull has nailed down a regular spot in the team with a series of consistent displays of late. On current form, he simply is one of the first names on the team sheet.

McLean has partnered Trybull in central midfield of late but Farke could look to give him some rest and hand Vrancic an opportunity on Saturday. Vrancic has been a vital player for Norwich this season and will look to repay his manager’s faith.

Scored a brace in the 3-2 victory over Hull and will be confident of getting on the score sheet again on Saturday.

The goal against Hull would have given Stiepermann a lot of confidence heading into the business end of the season. He is expected to start in his preferred no.10 role.

Blessed with explosive pace, power and trickery, Hernandez is a livewire on the field and can single-handedly torment Rotherham on Saturday.

Pukki has been a revelation for Farke’s side in the Championship. He will once again lead the attack as Canaries look to continue their winning run. 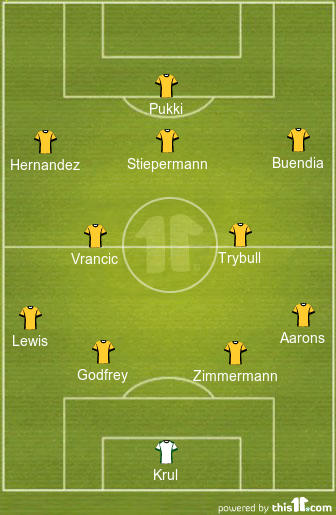