Norwich City host Hull City on Wednesday in a game that could see their lead at the top of the Championship extended to five points.

The Canaries have won their last four matches and remain unbeaten in league games at Carrow Road since the turn of the New Year. They head into the mid-week game on the back of a narrow 1-0 victory over Swansea City, courtesy Emi Buendia’s thunderbolt.

Hull City, meanwhile, are 12th in the table and will visit Norwich with an aim to spring a surprise.

Daniel Farke has no fresh injury concerns but will miss Buendia, who will serve a one-game suspension after picking up his fifth yellow card of the campaign.

Krul has played every game so far this season and should continue between the sticks on Wednesday.

Aarons has had a brilliant season at right-back and should continue to keep his place in the team.

Zimmermann has been a rock at the back for the Canaries. He is one of the first names on Farke’s team sheet. Godfrey dished out another stellar display in the 1-0 victory over Swansea and is growing as a player with every passing week. He should partner Zimmermann against Hull.

Lewis has been an undoubted starter at left-back for Farke’s side. The 21-year-old is exciting, fast and attacking and will look to continue his good vein of form.

Trybull has slowly but steadily made himself an important player for Farke this season. He is good at doing the dirty job in the midfield and is expected to keep his place for this game. McLean has formed a formidable partnership with Trybull in the engine room and the duo complement each other very well on the pitch.

With Buendia suspended, Farke could hand Cantwell a start on the right. Cantwell has played very little since the turn of the year but this should be a good chance to impress his manager.

Stiepermann has been a regular fixture for Norwich City and is a real threat to the defenders due to his qualities on and off the ball.

The 26-year-old is extremely quick, agile and unpredictable in his movement. He can be a real nightmare for the Hull defenders at Carrow Road. Pukki has been a revelation since joining Norwich on a free transfer from Brondby last summer. He is one of the main reasons why Farke and co. are gunning for promotion this term. 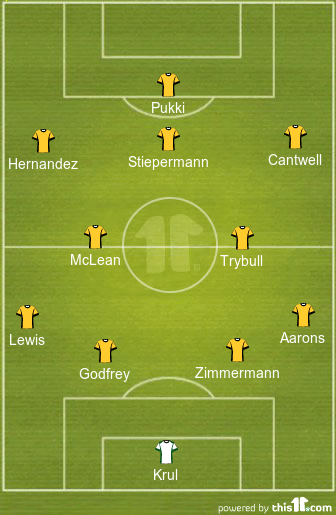