Manchester City will welcome Schalke to the Etihad Stadium on Tuesday in the second leg of their Champions League last-16 tie.

Pep Guardiola’s side needed late goals from Leroy Sane and Raheem Sterling to head home from Germany with a 3-2 victory, which puts them in a commanding position ahead of the return fixture on Tuesday.

And Manchester City will be confident of putting in a solid display and going through after flexing their muscles with a 3-1 victory over Watford in the Premier League last weekend.

Guardiola will be keen to welcome John Stones back from injury, while Aymeric Laporte and Fabian Delph could also be involved after being unused substitutes in the win over Watford.

The Brazilian is City’s undisputed number one and has been in fantastic form in the Premier League this season. He is expected to continue in goal.

One of the best right-backs in the Premier League, Walker is a certain starter against Schalke on Tuesday. The skipper has been getting regular game time of late and is set to start alongside Laporte in the Champions League.

Laporte has been brilliant for City this season. He has barely put a foot wrong and with Otamendi injured, the Frenchman is likely to start.

Injury to Mendy has seen Zinchenko establish himself at left-back. The Ukrainian is playing with a lot of confidence and deserves to keep his place in the starting XI.

It’s difficult to replicate what Fernandinho does for City but Gundogan has been decent in the Brazilian’s absence. Silva might be at the twilight of his career but is still going strong. His vision, technique and ability to combine with the forwards will be crucial for Guardiola’s side against Schalke.

One of City’s best players this season, the twinkle-footed Silva likes to take up promising positions in the final third and help his teammates with incisive passes and crosses.

Scored an absolute gem of a free-kick on his return to Schalke in the first leg. Sane will be raring to make his mark against his former employers, again. Scored a hat-trick against Watford last weekend which should give him a lot of confidence facing the German outfit on Tuesday.

Read more: Go for it Guardiola – Manchester City are in dire need of renewing this £43m star’s contract and here is why

Aguero is City’s main man in attack and should start at home against Schalke. 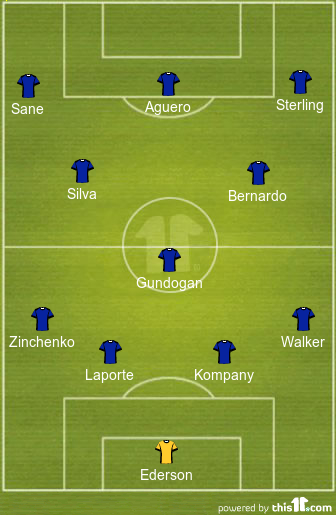