Predicted Liverpool line-up to face Bayern in the Champions League

Liverpool turn their attention to the Champions League on Wednesday, when they travel to Germany to face Bayern Munich in the second leg of the round of 16.

The teams drew 0-0 in the first leg of their last-16 match at Anfield and Jurgen Klopp will be hoping to beat Bayern at the Allianz Arena, thereby qualifying for the next round.

The Reds will head into Wednesday’s game off the back of a 4-2 comeback victory over relegation-threatened Burnley in the Premier League last weekend.

Trent Alexander-Arnold was substituted during Liverpool’s win over Burnley but the club is confident the young full-back will be fit for the Bayern clash.

James Milner missed the Sunday’s league game with a hamstring problem; however, he could be available for the trip to Munich.

Alisson is Liverpool’s undisputed first-choice in goal and will keep his place in the team on Wednesday.

Despite being substituted in the 4-2 victory over Burnley, Alexander-Arnold is expected to recover from his slight injury. He should retain his place at right-back. Matip has nailed down a regular place in the team with some solid performances of late. He will partner Van Dijk at the heart of Liverpool defence.

Having missed the first leg due to suspension, Van Dijk will have a mighty task on his shoulders to stop the in-form Bayern attackers. His performance will be crucial if the Reds are to progress to the next round.

One of the best left-backs in the Premier League, Robertson will be aiming to put in a strong display at Munich.

Fabinho has brought a lot of calmness in the midfield and given the team balance. He is a certain starter against the Bundesliga giants. Henderson came on as a substitute against Burnley on Sunday but could be handed a start to add more energy to the midfield.

After a solid performance in the 4-2 win over Burnley, Wijnaldum should be on top of Klopp’s list of midfield options for the Champions League game.

Mane will be pumped up against Bayern after scoring a fantastic hat-trick in the victory over Burnley. Salah has gone off the boil of late but there’s no denying his quality and ability to win games single-handedly. The Egyptian will keep his place on the right wing.

Read more: Liverpool would bag a massive coup by making a move to sign this aggressive 25-year-old left-back – Here is why

Firmino is an intelligent player who’ll look to give the likes of Hummels and Boateng a tough time on Wednesday. 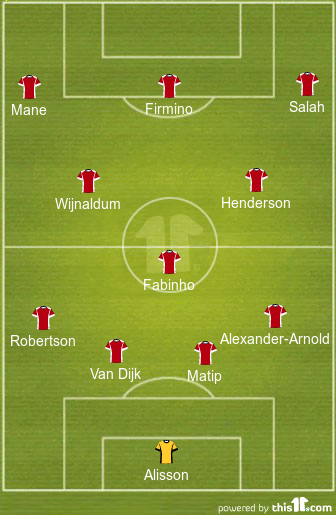 Leroy Sane to start on the left-wing? – Predicted 4-3-3 Man City XI to Schalke in the Champions League