Derby County welcome Stoke City at the Pride Park on Wednesday as Frank Lampard aims to bounce back to winning ways in the Championship.

The Rams were held to a 1-1 draw by Sheffield Wednesday last weekend at Pride Park. Lampard would have been frustrated with the result as Derby County were by far the better team but he’ll have very little time moaning about it as Stoke visit on Wednesday.

The Potters have struggled in the Championship after their relegation last year and currently sit 16th in the table, 10 points off the final playoff spot.

Mason Bennett limped off in the 1-1 draw with Sheffield Wednesday with a groin injury that is set to sideline him for the next few weeks.

Meanwhile, Craig Bryson and Mason Mount remain out injured for the Rams.

Carson would have been disappointed for not keeping a clean sheet against Sheffield Wednesday. He will be eager to shut the shop as quickly as possible against Stoke.

Bogle has been a regular fixture for Derby County under Lampard. The teenager will keep his place at right-back on Wednesday.

Keogh has played every game in the Championship so far this campaign and is expected to continue against Stoke. Tomori has excelled under the guidance of Lampard and should partner Keogh at the back in the midweek fixture.

Craig Forsyth’s injury has seen Malone nail down his spot at left-back. He is likely to get the nod ahead of veteran Ashley Cole against the Potters.

Huddlestone’s experience and ability to pick a pass from midfield will be vital for Derby in the run in for a place in the playoffs.

Johnson scored for the Rams in the 1-1 draw with the Owls last weekend. He adds a lot of energy and bite to the engine room and should start next to Huddlestone. With Bennett injured, Lampard could go with Jozefzoon on the left. The former Brentford man hasn’t been able to deliver as expected in his debut season for the Rams and should look to capitalize on the opportunities he gets.

Holmes is an intelligent player who likes to drop deeper at times and influence the game. He is a certain starter in the midweek Championship fixture.

Derby’s creative hub, Wilson will be expected to put in an impressive performance against a struggling Stoke side. Marriott came off the bench in the last game but could be handed a start this time around. 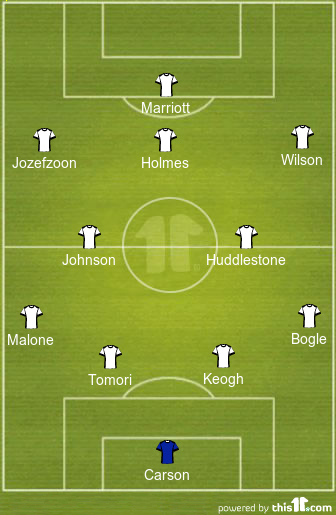