Predicted Leeds United line-up to face Reading in the Championship

Leeds United take on Reading at the Madejski Stadium on Tuesday as they look to build on their excellent back-to-back wins over West Brom and Bristol City.

The Whites sit second in the table and with third-placed Sheffield United coming to Elland Road this weekend, a win for Marcelo Bielsa’s side in the mid-week is very crucial.

Reading have won their last two games and will look to cause an upset against Leeds United.

Marcelo Bielsa has confirmed Patrick Bamford is fit to play after the forward was substituted in the 1-0 win over Bristol City last weekend.

He is their first-choice keeper since arriving in the January transfer window. Hence, he is expected to start on Tuesday as well.

Ayling is getting back to his old self and that’s a positive sign for Bielsa and Leeds. He is expected to keep his place at right-back.

The Swede has been solid this campaign and will look to continue his rich vein of form. Cooper and Jansson have built a strong partnership at the back and the duo will be hoping to register a clean sheet at Reading.

Alioski has done admirably well at left-back and Bielsa is expected to stick with the Macedonian on Tuesday.

Phillips is one of the first names on the team sheet. He protects the backline very well and covers a lot of ground, making him such an important player for Bielsa. The Spaniard is Leeds’ most creative player and Reading will have to especially keep an eye on him.

Roberts has done very well in the last few games and deserves to keep his place in the team.

Klich’s energy and passion for the team remain unmatched. He is an undoubted starter at Reading.

Read more: Leeds United are in dire need of boosting their attacking unit and this Premier League sensation would be perfect for that

Harrison needs to bring consistency to his game as we enter the business end of the season. However, he is expected to start on the left. Bamford has been passed fit to play on Tuesday. He is expected to lead the line at Madejski Stadium. 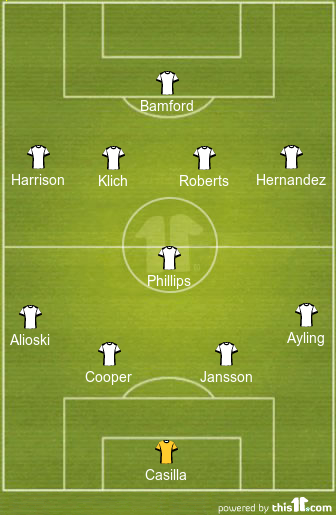