Predicted Derby line-up to face Sheffield Wednesday in the Championship

Derby County welcome Sheffield Wednesday at Pride Park on Saturday as Frank Lampard looks to get into the play-offs.

The Rams came from behind to beat Wigan Athletic 2-1 last weekend, thanks to second-half goals from Mason Bennett and Scott Malone.

Lampard’s Derby County will be high in confidence and hope to beat Sheffield Wednesday, who come into this game off the back of a 0-0 draw with arch-rivals Sheffield United.

Lampard confirmed the likes of Mason Mount and Craig Bryson are still sidelined but Tom Lawrence could return this weekend.

Carson would have been disappointed for not keeping a clean sheet against Wigan. He will look to keep one on Saturday.

Bogle has been impressive this campaign at right-back, putting in consistent displays for the Rams. He should definitely start against the Owls. Keogh has been a stellar presence at the back for Derby County this term. He has led the team very well after the team lost Davies for the season.

Partnering Keogh in central defence will be Tomori, who has shone so far under Lampard.

Malone scored the winner against Wigan in the last game and is expected to continue at left-back ahead of Ashley Cole.

Huddlestone brings a calming influence in the midfield and his passing range, as well as his experience, keeps the Rams ticking over. Johnson is an aggressive player who adds a lot of bite and tenacity to the Rams’ engine room. He is expected to partner Huddlestone in the middle of the park.

Bennett scored an outrageous goal in the 2-1 victory over Wigan. His confidence will certainly be high and deserves to get a nod ahead of Jozefzoon on the left flank.

Wilson has been Derby’s chief attacking force, having scored 10 goals so far in 29 games. The Welshman can demolish teams single-handedly on his day and that should keep the Wednesday defenders on their toes at the weekend. Waghorn needs to regain his goalscoring touch as quickly as possible to give his team the extra flair going forward.

Read more: Derby County should go all out and plot an audacious swoop for this 24-year-old Millwall sensation to shore up defensive woes

Leading the Derby attack on Saturday will be none other than Marriott, who has seven goals so far this season. 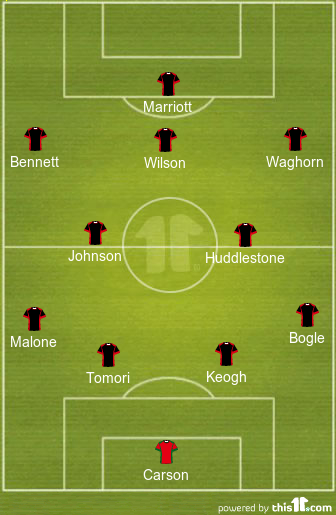