Derby County will travel to the Villa Park to play Aston Villa as Frank Lampard hopes to bounce back from last game’s disappointment.

The Rams suffered defeat to Nottingham Forest at the City Ground and Lampard must pick his players up for the game against Aston Villa at the weekend.

Aston Villa are 13th in the table and will come into this game on the back of a 1-1 draw with Stoke City.

Andy King has been ruled out for the season after suffering an ankle injury in the 1-0 defeat at Nottingham Forest.

Meanwhile, Mason Mount, Craig Bryson and Tom Lawrence have been ruled out for this game.

Roos has overtaken Carson as the first-choice goalkeeper in the team and should start in goal this weekend.

Bogle was the guilty party on Monday that led to Derby conceding the goal against Nottingham Forest. He will be raring to make amends on Saturday at Villa Park. He has been a regular fixture at the back for the Rams this season. Expect the veteran defender to start this weekend.

Tomori and Keogh have formed a strong partnership at the back, so there’s no reason for Lampard to disturb their equation.

Cole is a highly-experienced player who will look to help Derby achieve a positive result against Aston Villa.

Johnson could be given the nod ahead of Huddlestone at the weekend, purely because the latter struggled massively against Nottingham Forest. With King ruled out for the season, Lampard could use Wilson in central midfield at Villa Park.

Holmes brings a lot of energy and dynamism to the Derby midfield. He should retain his place in the starting XI.

Waghorn has blown hot and cold this season, failing to nail down a regular place in the team. However, he is expected to start on the right wing at the weekend. With his blistering pace and dribbling skills, Jozefzoon could give the Villa defenders a tough time on Saturday.

Read more: Derby County should plot an ambitious swoop for this powerful Southampton ace to fix vulnerabilities at the back – Here is why the move would be ideal

Marriott will need to start scoring again to help the Rams clinch a spot in the play-off. 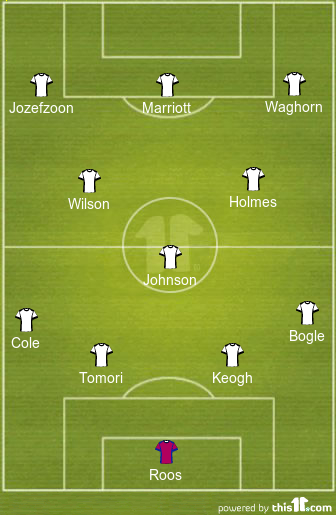