According to The Sun, Chelsea want to sign West Ham’s 19-year-old Irish midfielder Declan Rice as a potential replacement for Danny Drinkwater and Tiemoue Bakayoko.

Rice was a product of the Chelsea academy and stayed at Stamford Bridge for seven years before being released by the Blues at the age of 14. However, his meteoric growth and impressive performances in the Premier League this season have prompted Chelsea to make a move for their former academy product.

Rice has played a vital role in West Ham’s resurgence after the Hammers lost four games on a trot at the start of the season. Manuel Pellegrini played a tactical masterstroke and deployed the Irishman as a shield for the rearguard, something that has brought the best out of the youngster.

Not only has he helped the Hammers achieve a better defensive record with his exploits in central midfield but has also contributed with his range of passing. His excellent game-reading ability and high levels of concentration added that much-needed stability to West Ham’s midfield, allowing the likes of Pedro Obiang and Mark Noble to play in a more advanced role.

The 19-year-old has surpassed all expectations, making a number of good tackles and sharp interceptions to break-up the play, which, in turn, has reduced the pressure on the backline.

Rice has averaged 2.6 tackles and 1.9 interceptions and 2.3 clearances per game this term in the Premier League. He has looked comfortable in possession, contributing with his impressive range of passing and setting up attacks from a deep position in the midfield with precise long passes.

In fact, the Irishman has averaged 41.4 passes per game with an accuracy percentage of 85.8. Furthermore, he has registered 2.6 successful long balls and 1.3 aerial duels per game, which speaks volumes of his all-around attributes as a central defensive midfielder. 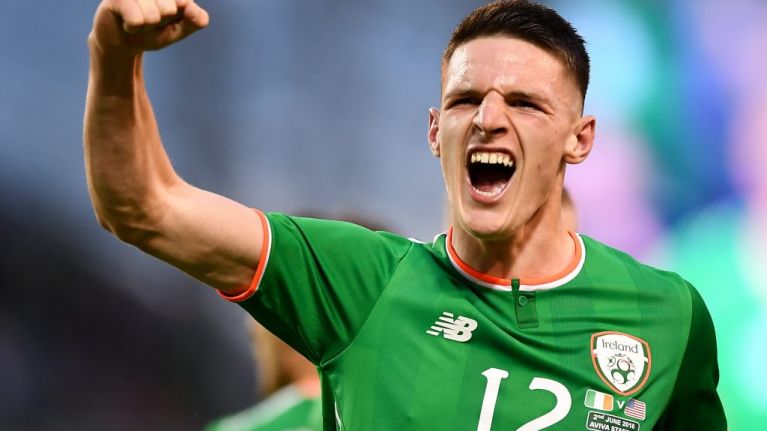 To put things into perspective, Declan Rice would be a perfect addition to Chelsea’s squad. Granted, Jorginho has established himself as a prolific passer and a perfect fit for Maurizio Sarri’s style of play but the Blues do not have a replacement for the Italian.

Cesc Fabregas’ contract is set to expire next summer and Sarri hasn’t utilized the Spaniard in the Premier League. Danny Drinkwater is clearly not in the manager’s plans and it is unlikely that the Blues will have Tiemoue Bakayoko on their payroll for much longer given that he has been performing horribly on his loan spell at AC Milan.

As things stand, Chelsea need to add more depth to their squad to avoid a potential burn out of options in the latter stages of the season when the injuries start to creep in. And West Ham’s Declan Rice would be a perfect option for Sarri to bolster his squad in January.

That said, Chelsea should offer Rice a lucrative contract and leave no stone unturned in their efforts to bring him back to Stamford Bridge.