England should convince Declan Rice to switch his international allegiance

According to Evening Standard, West Ham United midfielder Declan Rice has stated that he needs more time to choose between England and Ireland. The 19-year-old has been capped thrice by the Republic of Ireland but is eligible to play for England as well.

Rice has represented the Republic of Ireland at all youth levels, having featured for his nation at the U16, U17, U19 and U21 set-ups. He has also won the award for Republic of Ireland’s best U17 and U19 player in 2017 and 2018 respectively.

Speculations of a possible switch of allegiance were fuelled when Martin O’Neill left Rice out of Ireland’s squad for their UEFA Nations League opener against Wales. England have been trying to convince him to pursue his international future with them and the youngster needed some time to make up his mind (h/t Evening Standard).

Rice was named West Ham’s best young player of the year in 2017 and 2018. In fact, the 2017/18 season proved to be his breakthrough term as he went on to make 26 appearances in the Premier League. However, the youngster has taken his game to a new level this season and manager Manuel Pellegrini has brought the best out of him as a player. To be honest, Rice was instrumental in turning West Ham’s fortunes around this season. Things seemed to be going all wrong for Pellegrini as the Hammers were struggling at the bottom of the table with four losses out of four. West Ham certainly needed some changes and introducing Declan Rice in the midfield changed it all for the Hammers.

Although Rice found life difficult in West Ham’s 4-0 defeat at the hands of Liverpool on opening day, he looked a completely different player when Pellegrini reinstated him in the starting XI. In his comeback game against Everton, Rice put up a formidable performance in the central midfield and helped his team register their first win of the season.

Slotted into a defensive role in front of the back four by the manager, Rice not only dominated the midfield with his strong tackling and sharp interceptions but also helped out the defenders by playing as a shield for the rearguard.

Consequently, his midfield compatriot Pedro Obiang was able to assume a more free role and contributed to both of West Ham’s goals by linking the play with Andriy Yarmolenko and Marko Arnautovic.

Rice followed it up with back-to-back impressive performances against Chelsea and Manchester United. He visibly displayed maturity and composure that belies his age and didn’t get bogged down by the reputations of N’Golo Kante and Mateo Kovacic. The 19-year-old carried his good form and confidence to the game against United where he nullified Paul Pogba to the extent that the Red Devils found it difficult to create chances from the midfield. 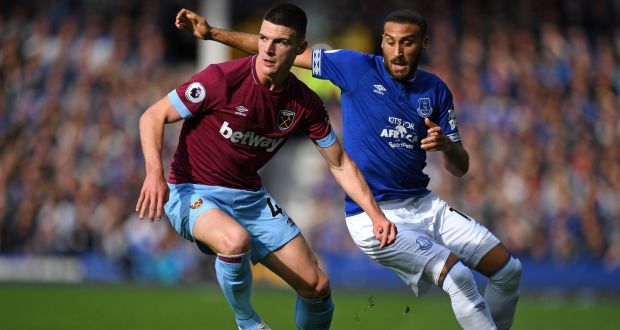 To put things into perspective, England need a defensive midfielder like him. His presence will not only provide the defenders with security but will also help them dictate the tempo of the game. Rice is also adept at breaking up the play and carrying the ball forward with intent.

Another impressive thing about him is his sense of positioning. At times, he stays back and plays as a part of the backline but when his team wins the ball back, he keeps things ticking in the midfield with his good range of passing.

England have John Stones who can play as a defensive midfielder but Gareth Southgate must instead utilize the ball-playing centre-back in the heart of his defence. On the other hand, Declan Rice is a versatile product who can effectively fill in the boots of a centre-back if needed.

Hence, going by the kind of development he has shown in the past couple of seasons, England should try to convince the 19-year-old to switch his allegiance as he is likely to develop into a star product in the future.