In their most recent fixture, Chelsea beat Leicester City to cement their place in the FA Cup semifinals. They now turn their focus on achieving the top-four finish.

Callum Hudson-Odoi is a doubtful starter as it is not sure if the winger has fully recovered from his ankle injury while Christian Pulisic too is doubtful after he was forced off in the FA cup tie. The blues are also set to miss Fikayo Tomori and Andreas Christensen, as well as long-time absentee Marco Van Ginkel.

The first-choice keeper, Kepa is very likely to don the gloves as Chelsea face rivals West Ham. The Spaniard will look to keep a clean sheet and should get the nod ahead of Caballero.

The youngster has improved a lot and is likely to start at right-back.

The German international will retain his place in the heart of the defence as he is the side’s best defender without a doubt.

The skipper will start at centre-back after Alonso is likely to start at left-back.

Alonso hasn’t been consistent this season and will have to be at the top of his game if he wants to keep his place going forward.

The player has been consistent throughout the season and will play a vital role in the game.

Despite struggling with injuries, Kante is one of the best in the whole of Europe and Lampard will be hoping the player finds his old form soon.

Having returned from injury, the player is all set to be a big part of the season as the club tries to cement its place in the top four.

The Brazilian is expected to start in the fixture on the right wing. He will be key as Chelsea look forward to take their place in Champions League football next season.

The player has put up a very good performance this season. He will look to build on those performances.

Chelsea will look to rotate their squad and senior striker Giroud is likely to lead the pack with Tammy Abraham likely to be rested after playing full 90 minutes on Sunday. 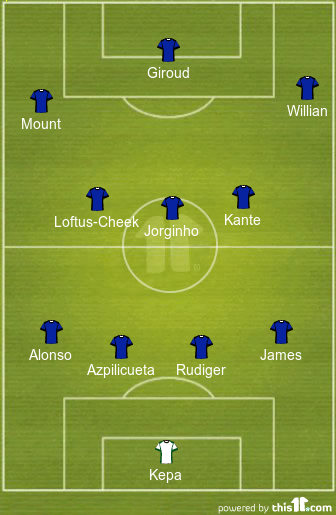